After an excellent leisurely breakfast at the Pullman Hotel we walked along to the London Canal Museum just off Kings Cross.  The museum is small but the exhibits are well presented and the minimum of narrative helped explain things very well indeed.  It traced the beginnings of the canal system, the unification into a national system and the decline first from railway competition and then from the highways.  It was surprising to learn that the hard winter of 1963 was what finally ended the use of canals as commercial enterprises.  The museum also had an ice hole which was used to store ice brought over from Norway.  It originally was over 40 feet deep but had been filled in with rubble from the wartime bombing.
From here we walked along the canal towpath, with a couple of diversions as far as Regents Park.

The route is below street level and there are some grassy and woody areas.  It is well populated with narrow boats, many seemed to be lived in and many used wood for heating.  There were many water birds to be seen.

Regents Park is vast. There were a large number of people exercising their dogs and children but it didn't seem crowded at all.  One little girl cycled past us ringing her bell and oblivious to where she was going.  Her father was getting a good work out just keeping up with her.  Many dogs were taking their own ball, stick or plastic bottle with them.  Several were jumping all over and getting a great deal of exercise.

The waterfowl in the ponds is spectacular at this time of year  with many ducks, swans and geese over wintering here, there were tufted ducks, mallard, pintail, pochard, ruddy duck (?), scaup. shoveller, wigeon, wood duck and a host of others.  We enjoyed watching a couple of tufted ducks floating on their backs grooming their underfeathers.

We were able to approach a heron close up and were suddenly surrounded by six of them with another two in adjacent trees.  They were very tame and we have never seen so many so close before. 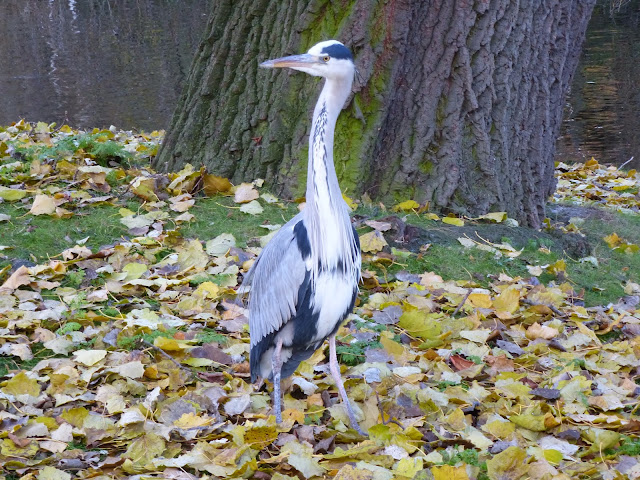 The Parcels Yard at Kings Cross, a Fullers House was sufficiently empty that we managed to find a couple of easy chairs for a drink. This was originally a Great Northern Railway parcels shed.  It has been converted into a two story restaurant and bar.  On week days it is very crowded, particularly with commuters waiting for their trains home. I tried a Fullers Jack Frost which is supposed to warm you.  It is a medium dark beer that I found to be too sweet for my liking. 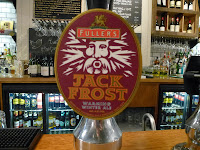 Posted by Colin Churcher at 9:03 AM