Montgomery is a very small, quite remote, town, formerly in Montgomeryshire, now in Powis.  There is one bus that leaves Shrewsbury at 0845 and it is possible to return at 1325.  At the bus stop there were a large number of school kids waiting as well and we wondered if we would have to stand.  They went in another bus and it turned out that we were the only passengers on a regular sized bus all the way. The bus took us through unspoilt country typical of Central Wales with wide valleys, wooded hilltops and mainly livestock farming although some grain and maize was also being grown. The town is huddled under a wooded hill with the castle ruins standing out on the skyline.
The driver dropped us off at the Town Hall which was being used for an auction, mainly of old furniture.  A teashop just down the street served up a very good latte and we made a reservation for lunch - upstairs at a table with a view across the main street (Broad Street).
The castle seemed the obvious place to start our exploration of Montgomery.  We climbed a steep, slippery path to the top of the hill.  The castle area was well grassed and it had been cut recently.  There were excellent views on all sides, both across or over the town and into the country beyond. 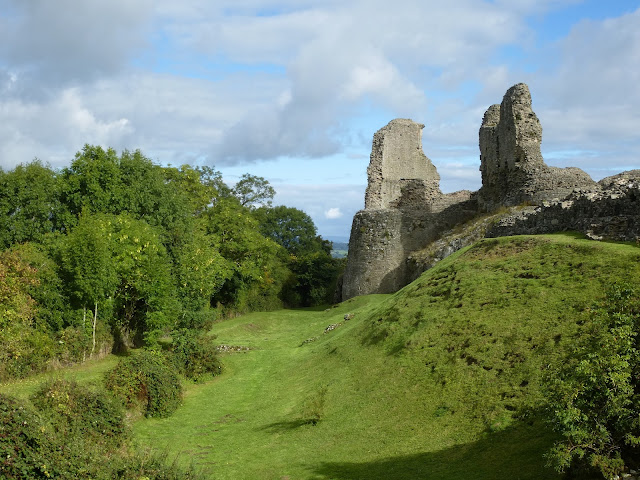 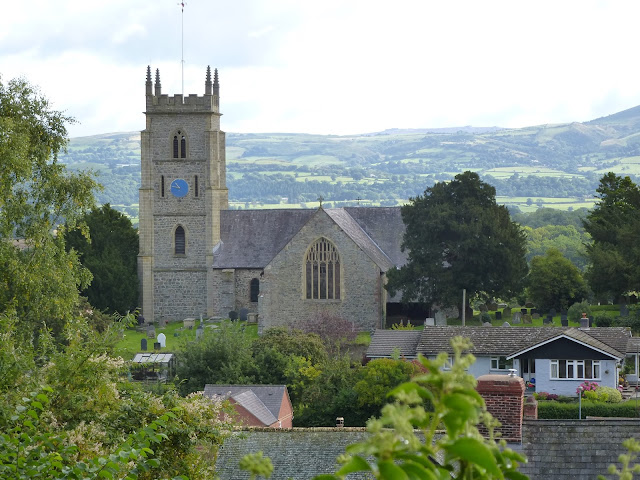 Having walked through the ruins and spotted a rabbit in the grass below, we decided to walk around the outside.  The whole area is covered with blackberry brambles and the fruit was ripe - it would have made countless pies,  I quickly picked a handful. It reminded me of the time I was Area Manager Cholsey and Moulsford.  I had a way freight which ran down to Wallingford and then returned to Reading around the time I was ready to go home.  The yard at Wallingford had a great number of blackberry brambles.  I worked an arrangement with the driver.  One cup of blackberries bought me a ride on the engine back to Reading.  Two cups of blackberries allowed me to drive the locomotive, a 95xx diesel hydraulic which had a wide cab with the control stand on one end rather like the counter of a fish and chip shop.  We called them Fish and Chip Shops. Needless to say I always picked two cups!

Back in Montgomery we walked across the town to look at the church which was on a small hill.  There were a large number of apple trees ready to be picked (or scrumped).  I was reminded of the poem Linden Lea put to music by Ralph Vaughan-Williams:
"To where, for me, the apple tree
Do lean down low in Linden Lea "

The intention was then to visit the hardware store then the town museum which would then take us up to lunch.  The hardware store has been in the same family for 120 years.  It was amazing - it contained everything you could think of in a series of small rooms on two levels, packed from floor to ceiling.  The owners were pleasant and obliging.
We next went to visit the museum to find that it was closed so we had to cool our heels for an hour or so.
Lunch was roasted tomato, courgette and basil soup with herb and cheese scone/Talerddig bread.  The entree was sweet potato, leek and goat cheese mousaka with salad.  An excellent lunch.  The Talerddig bread came from the bakery at Talerddig which was quite familiar to me as being the name of the steep grade on the line between Welshpool and Machynlleth.  I didn't know there was a village there, yet alone a bakery.
Having pre-ordered our lunch, it came quickly and there was time afterwards for a quick pint before the bus arrived. A Brains beers The Rev. James was sampled at the Crown.  A good bitter, quite dark. 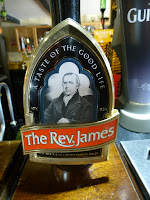 As we waited for the bus, the auctioneer was going full swing. 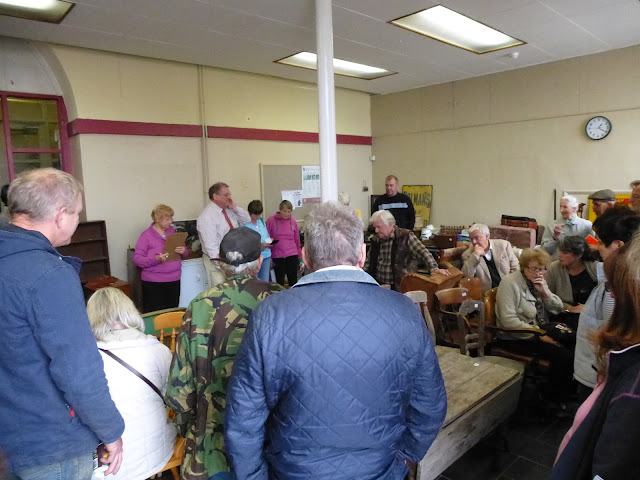 There were a few people on the bus on the way back but it was not a paying load.
It has been alternating hot and cold all day but the rain held off. 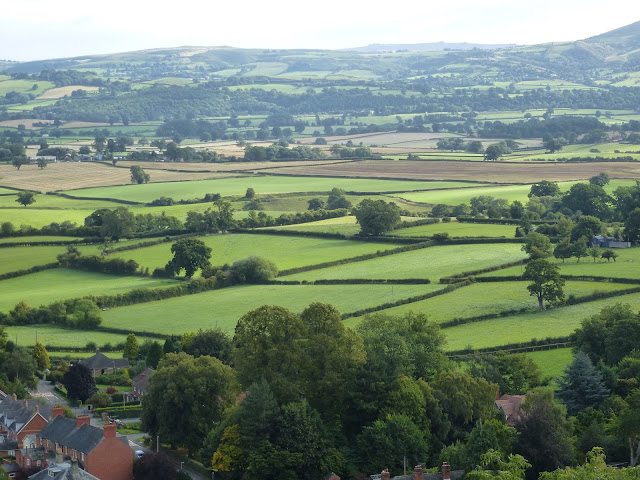 Click here to see all pictures taken at Montgomery:
http://www.flickr.com/photos/colinchurcher/sets/72157636397083754/
Click below to see these pictures in slide show format.
This evening we had another visit to the Three Fishes and I sampled a Scottish beer, Jarl.  This is a pale ale with a slight taste of grapefruit. 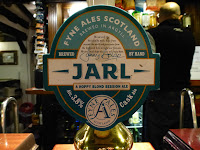 Posted by Colin Churcher at 9:36 AM