Air Canada sucked us in at Ottawa and blew us out at London Heathrow where it was a slow day. There were a lot of babies and young children but it was a very quiet flight. The flight was short and we arrived early having passed over Haverfordwest, Cardiff and Bath. There were not many at Immigration and Mary's bag was already on the carousel. I didn't check a bag. The man at the money change also sold us tickets for the Heathrow Express. There was ample time at Paddington to drop into the Mad Bishop and Bear for a pint of Fuller's London Pride and a vegetarian breakfast.
More luck as the 205 bus to Euston arrived at the stop just as we did. Euston was hot and busy and we had almost two hours before our train. There were no seats in the concourse but our luck held as we found the first class lounge where we were able to wait in air conditioned comfort. The sim card I bought from a machine at Heathrow worked first time. 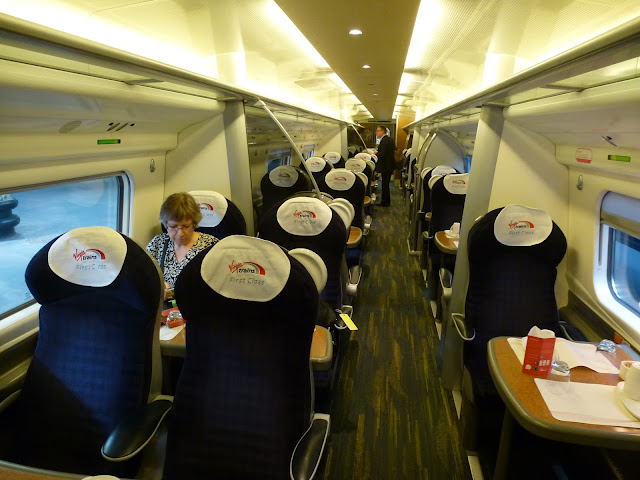 Our train left on time. It was a Virgin Trains electric Pendolino, first stop Crewe. The route is uninteresting and I dozed. We came to a stop at a signal at Stafford. There was a long stand and the Manager said we would be 15 minutes late because of signalling difficulties. I could have told him that. Virgin Train Managers are good at falling on their swords. He apologized profusely but we missed our connection and had to wait 45 minutes for the next train to Shrewsbury. It was going to Pembroke Dock of all places via Shrewsbury, Cwmbran, Cardiff, Swansea and Carmarthen. Goodness knows how long it took as it stopped at all stations.
It was a quick walk up the hill to the Prince Rupert Hotel where we received a warm welcome and an offer of a glass of sherry. The room is excellent with lots of electrical outlets. There is a four poster bed and we were treated to a bowl of fruit and a box of chocolates.
We had a short walk around and decided to eat at The Chambers a bistro owned as part of the hotel but physically separated from it although in the same block.
Pint of Boddington's draft.
Poached salmon
Grilled chicken

Posted by Colin Churcher at 4:49 AM