Bright and sunny today but with a cool wind. Many of the stores are open but there are no local buses running.
We walked all the way beside the river stopping at the Quarry gardens to admire the display of flowers. 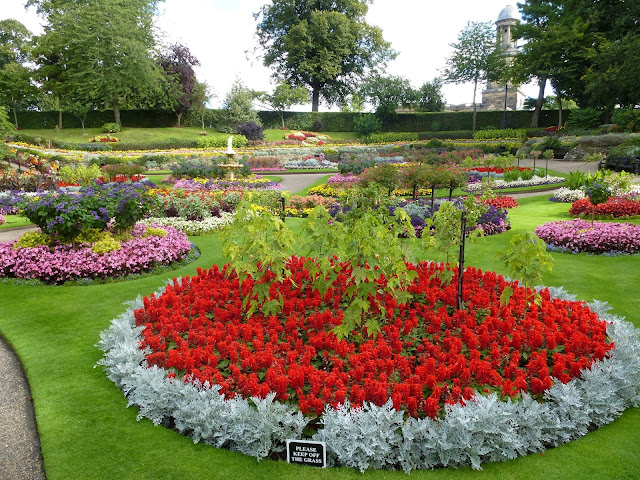 The ducks were on the lookout for food and several pairs of robins were twittering in the trees. A solitary pigeon was clambering around in a Japanese Maple eating the seeds.
A small circus was set up on the grass by the river. 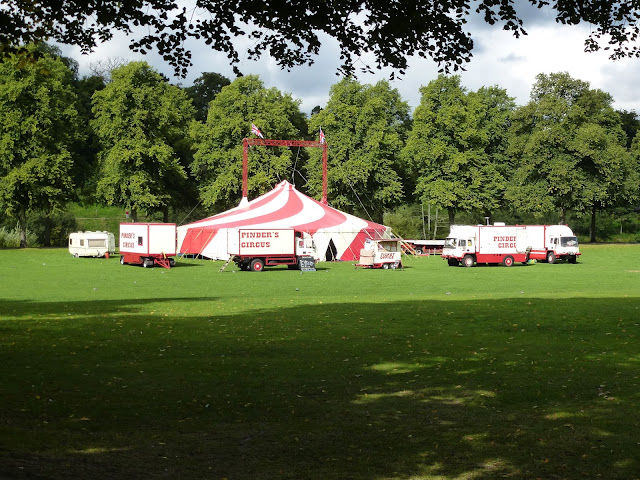 We followed the river as far as the weir then came back into town passing the prison.
Lunch was at The Drapers, a beautiful period building that was originally built aserr t  the Drapers Hall. The service was good and the food was well prepared but the menu was restricted to fish and red meat. The Shropshire Gold was a good bitter. 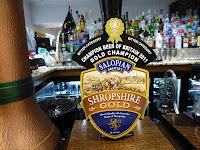 This evening we went to a concert Chantorion with a Welsh male voice choir at the Severn Theatre. The audience was definitely the older set and the songs were chosen accordingly. I didn't know any of them except for the show songs e.g. from Les Miserables. The three male soloists were excellent and they imported some glamour in thr form of a well known Welsh soprano who had a very powerful voice and sang songs of love. One of the choir introduced the peogram and was very amusing. The program was well paced and very entertaining. The choir has won a number of prizes both here and in Ireland. To me, the most impressive was a piece called " luz" which was sung a capella by the 45 strong choir. The choir came into the foyet at the break where a table of tea and biscuits had been set oit for them. Although there was a large, well stocked bar, most people were drinking a nice cup of tea while many has ice lollies on a stick. The performance was in English and Welsh. I did know the encore " Monte Christo" and the performance ended with the audience singing the Welsh National Anthem in Welsh "My hen wlad fi nadau". Happily I knew the words.
Return to the hotel took just 10 minutes and we decided to go to the Three Fishes if we could get in. It was completely empty and we enjoyed a Guiness (Mary) and a Bishops Castle award winning stout (Colin). After about ten minutes a well lubricated man came in and there was a heated discussion about the merits of London and Paris.

Posted by Colin Churcher at 7:07 AM