The weather forecast was better today so we decided to return to Ellesmere to see the Mere and the canal. The bus started with four passengers, including us, but the other two got off at the outskirts of Shrewsbury. The ride is through wonderful high rolling country with good views in all directions.  There was a thatched cottage which is not very common in these parts. One other lady got on at the outskirts of Ellesmere and there was a short conversation.
The driver "My wife fell down the stairs the other day."
"Goodness I hope she wasn't carrying the baby."
"I don't think so.
"Reggie cut his finger off last week."
We stopped in at the Mere Visitor centre at the Boathouse and fortified by a latte and some bara brith we set off to walk around part of the mere. 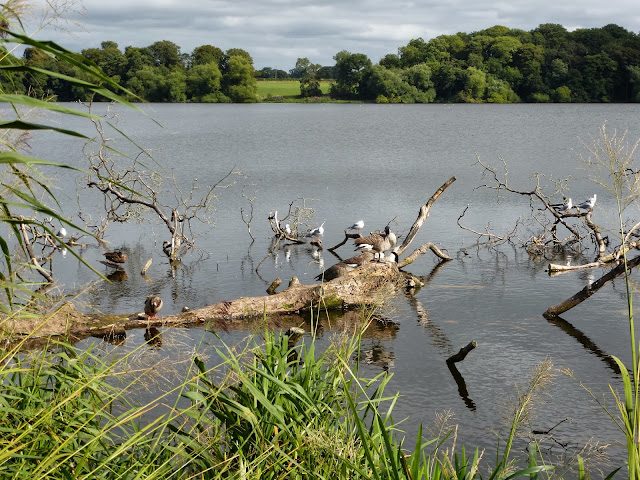 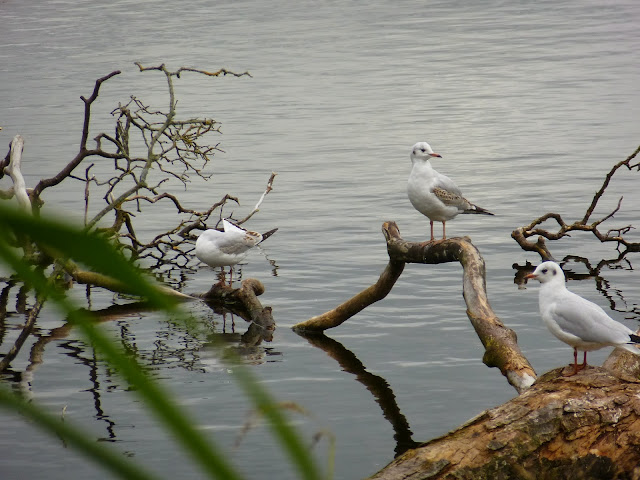 A mere is a rare phenomenon left over from the ice age. When the glaciers retreated they left behind depressions which filled with water. They have no outlet as the water drains into them. The nutrient rich water encourages the growth of reeds etc. which attract insects and water fowl. There were a lot of ducks, geese, swans etc. which were also attracted by the food given by the tourists. 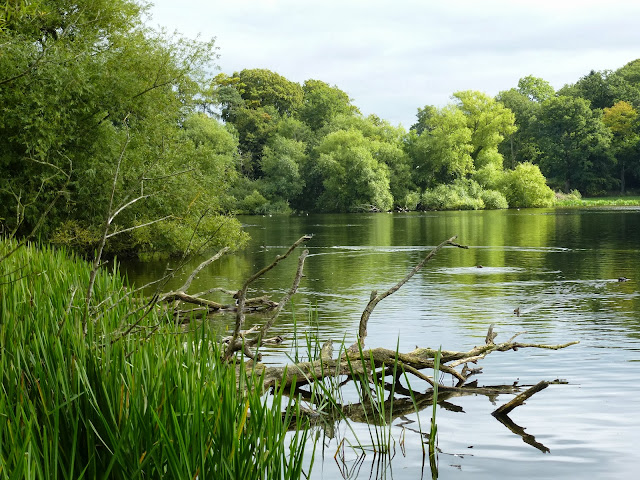 The walk was delightful through fairly thick woods. We met a couple with three kids who were looking for conkers. The father was going to teach his primary school aged kids how to play. We talked about conkers bruising the knuckles and cutting the fingers when the strings tangled. An area had been cordoned off because of wadps nests. Another area had been cleared for a planting of violets to encourage a particular type of endangered butterfly. 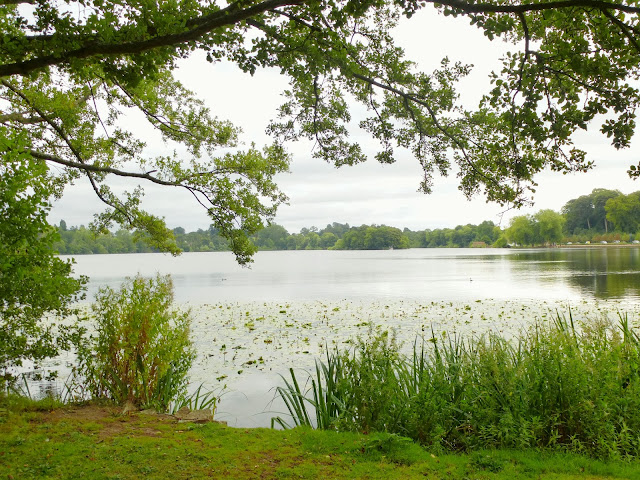 We returned to the Boathouse for lunch - fishcake and warm salad. Mary had some Bakewell tart to try. The chef came up and spoke to some friends with a dog outside. The dog started to lick the sole of her shoe. After a time she changed her stance so the dog could lick the other sole. She uses shoe covers in the kitchen and these contain bits of food which rub off on to her shoes.

I was glad that Oswestry Brewery Station Bitter was on the pump.  One of the servers lived on a sheep farm in Oswestry. Last winter was a bad one and they had 700 lambs to deal with. They lost a lot in the cold. I said to her, " I'm glad you have Oswestry Bitter here but you wouldn't know about that."
She replied with a wink, " I was 18 a couple of days ago."
The next part was a walk to the canal. The first part was through a cow pasture followed by a descent through woodland to the canal. The route through the pasture was marked by a number of pieces of art. 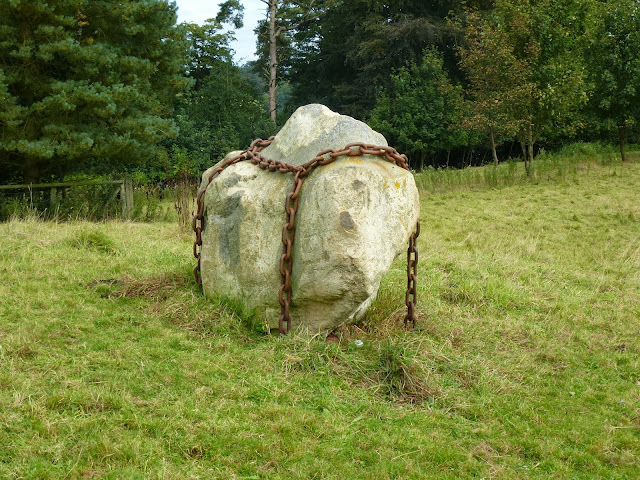 There were blackberries and damson plums in the woods - enough to make a lot of jelly. We first realized that we were approaching the canal when we saw through a hole in a hedge a canal boat moving past silently. The walk along the tow path was accompanied by canal boats passing under the stares of cattle in the adjacent fields. 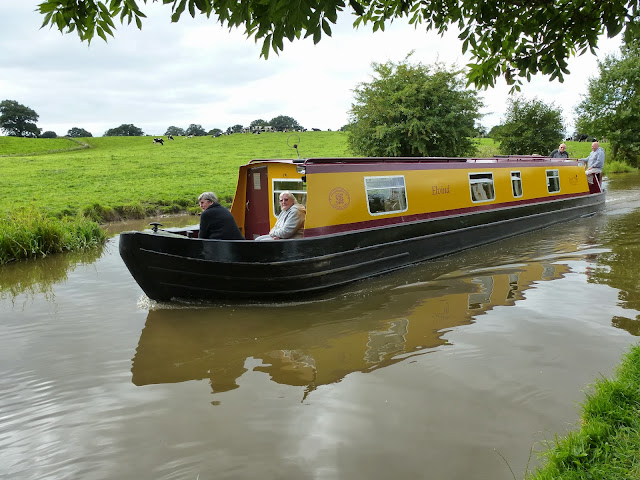 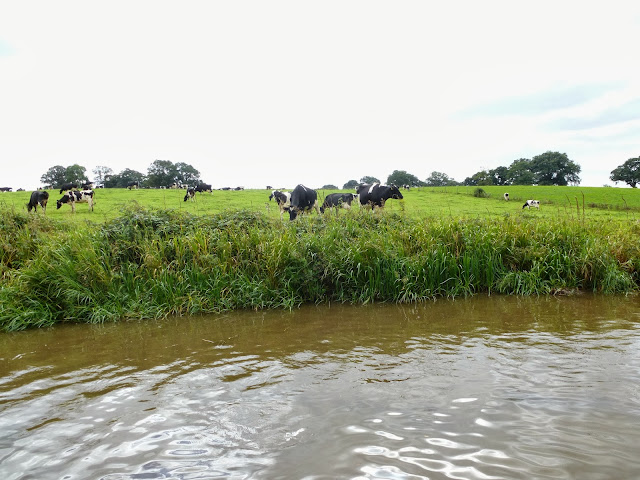 The entire walk to the canal basin was charming. The canal basin looked better than last time as it was not raining but there is still a lot more that could be done to improve things. 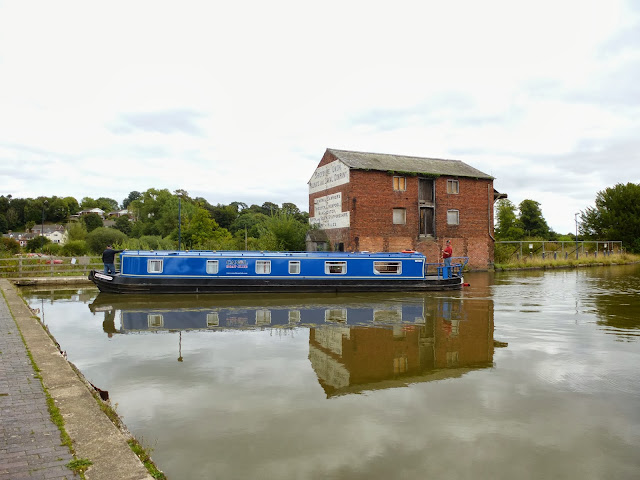 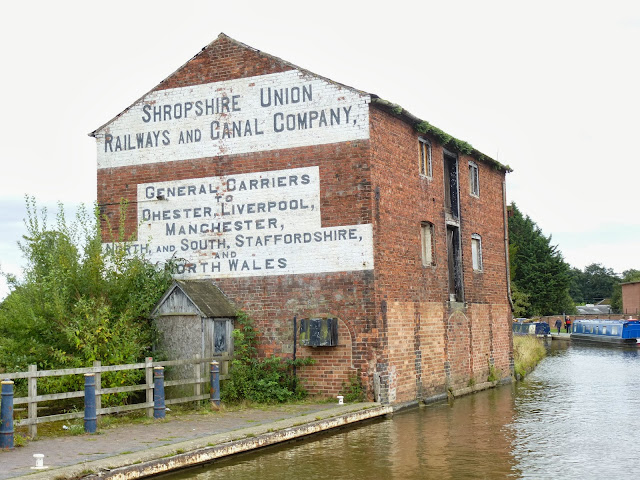 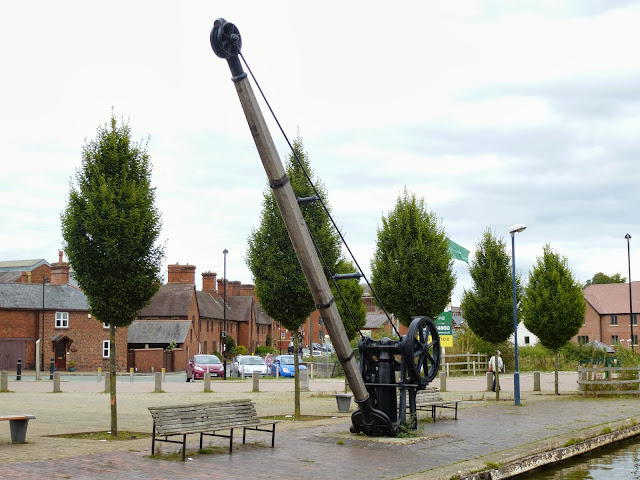 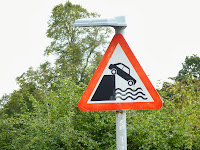 We still had a little time to wait before the bus was due to leave so we went into the Market Hotel for a pint of  Black Sheep Brewery Best Bitter. This is a Yorkshire beer, full bodied with a long, strong bitter flavor.  A good beer but one would have to be in the mood for it because it is very bitter. 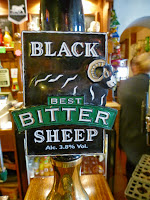 Click here to see all pictures taken on both days at Ellesmere:
http://www.flickr.com/photos/colinchurcher/sets/72157636389268255/
Click below to see these pictures in slide show format
The bus back to Shrewsbury was almost ten minutes late turning up but business was poor and we arrived five minutes early. Another great day.
Posted by Colin Churcher at 8:50 AM