We have finally had some rain! It rained overnight but was clearing up by the time we left the hotel.
Mary has been having an orange at breakfast. There were no oranges on the buffet this morning so she asked if there was one in the kitchen. Pretty quickly a waitress came out, smiling broadly, carrying an orange on a plate.
1010 bus to Porthmadog. We bought a day pass which is the same price as a single to Bangor.
At Porthmadog the toilets cost 20p but somebody had blocked the door open with the "Caution wet floor" sign so I had a free p.
1100 bus Porthmadog to Bangor. Good job we got on here rather than Tremadog as the bus was full of slow moving old people with sticks, a man with a white stick, another with a seeing eye dog, two mothers with push chairs and a sleeping Japanese tourist who must have come through from Criccieth. A little boy in a push chair dropped a cheese stick on the floor which was gratefully gobbled up by the seeing eye dog.
The bus stopped at the station in Bangor so we didn't have to find our way up from the town.
We had a wait of a little more than an hour for the train. The guard had to stop the train as Conwy is a request stop.
Castle Hotel has a long history and has a good reputation. The room door is so low Colin has to dick. It has a charming atmosphere. All the electrical items are wired in in the rooms and we couldn't find any three pin outlets even though a hair drier and a kettle were provided. Colin and a man from the hotel had a search and eventually found two behind the dresser.


We had a brief look around in the afternoon including the Telford suspension and the Stevenson Tubular bridges. I found a bottle of Courage Directors Ale in the supermarket.

After an excellent meal at the hotel we took a walk around and enjoyed the views of the castle from the castle walls. 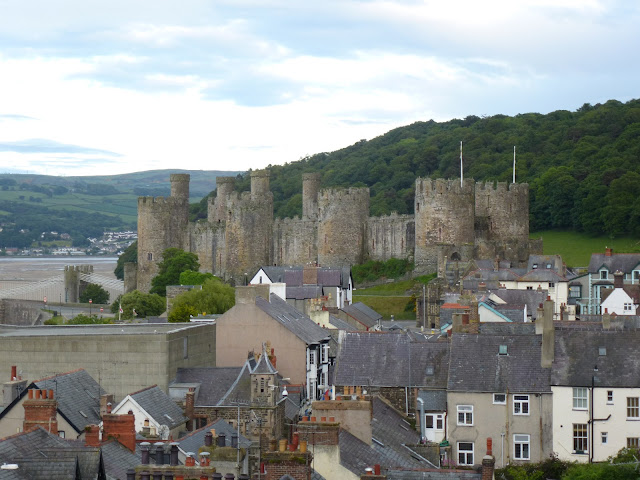 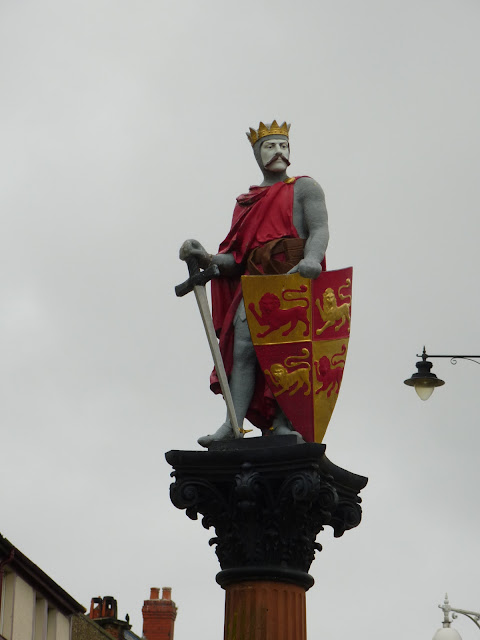 Posted by Colin Churcher at 3:35 AM