Getting to Montparnasse to catch the TGV to Tours proved a bit of an adventure in itself.  We were just entering Ternes station on the Metro when the line power went off, the train brakes went into emergency and the battery lighting came on. The driver explained there had been an accident with somebody on the line.  Then the power came back and we resumed our journey after a delay of only a couple of minutes.  We arrived in Montparnasse in plenty of time.

The sunny but cold weather continued.  The trees and fields were covered in frost which the sun was not able to melt completely as the day passed.  We saw about eight deer in one field.  The trip to Tours takes about an hour and pretty soon we came out of the tunnel, past the village of Vouvray and crossed the wide river Loire which signalled our approach to St. Pierre des Corps.  Tours is a stub end station so most trains call at St. Pierre des Corps and passengers have to change into another train to get to Tours.  There was some confusion as three trains were going to Tours but two of them were running late.  The third one due turned out to be the second to arrive at Tours.
The tourist office provided a good map and a plan and we went first to the Cathedral, stopping off to see the Lebanese Cedar, planted in 1804 in the Bishops Garden as well as the elephant, Fritz, which escaped from Barnum and Baileys Circus in 1904 and had to be shot.  He was stuffed and is now on display behind a glass case. 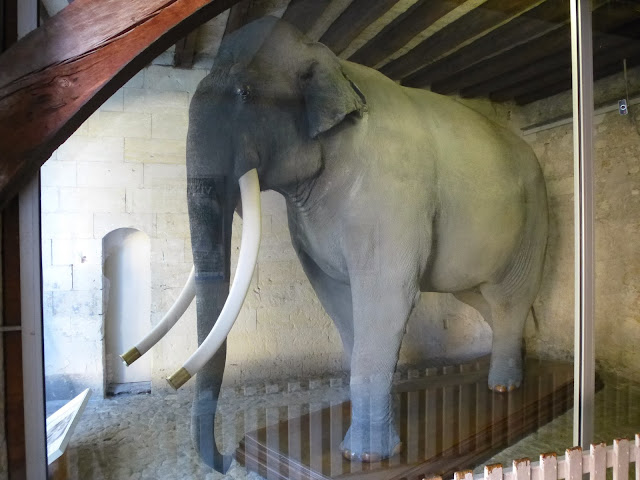 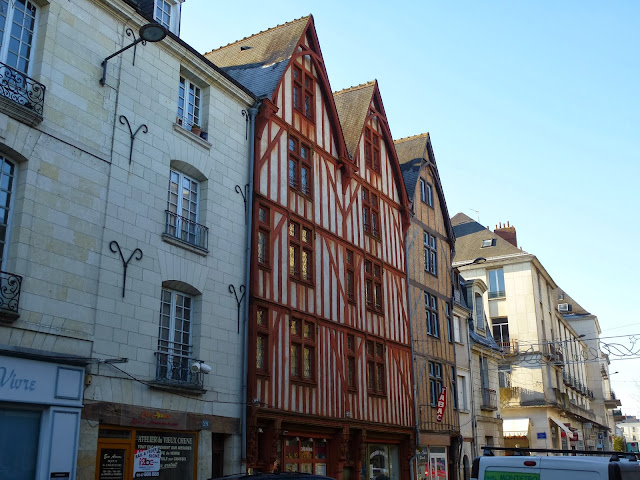 The old quarter contains some interesting timbered framed brick buildings and we had a look at the new trams which started running last December.  They are a standard seven unit design with custom driving cabs.  The frequency is not too good during the day although they advertise a six minute service during the peaks.  There is extensive use of the ground pick up system, including on the bridge over the Loire, so the system was expensive to build. The strong sun at low angles made photography difficult. 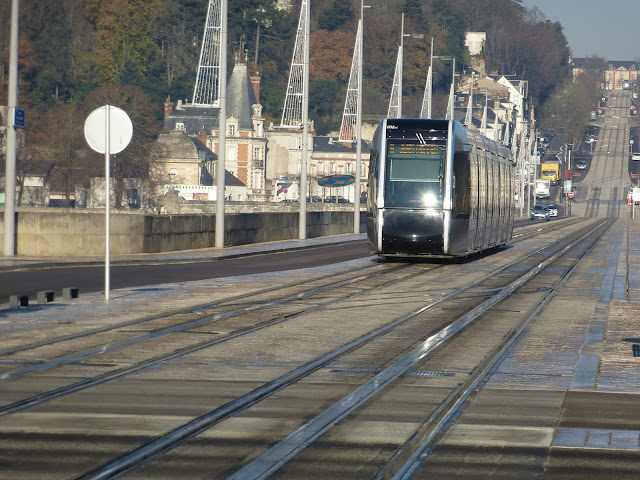 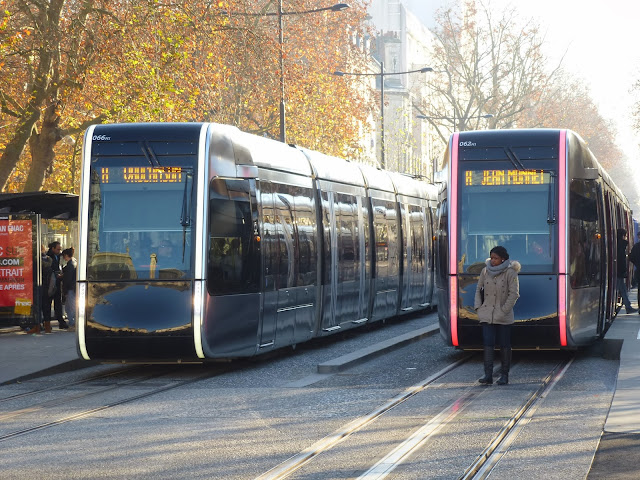 We chose a good restaurant for lunch.  Mary started with pickled herring while I had rillons which are a speciality of this area and like a larger, more meatier, version of scratchings.  They do not have the skin so one does not have to worry about ones teeth. The main course was escalope de veau with sauce Normande while I had confit de Canard with a cherry sauce. Both were very good.  An unimpressive Tarte Tatin and an excellent Saumur Champigny completed a good meal.
Wednesday is market day and there were several areas with open air stalls supplemented by the Christmas markets which sell mainly junk.
Bearing in mind the poor timekeeping of the shuttles to St. Pierre des Corps we caught an earlier train from Tours.  Our TGV was advertised as being five minutes late.  It arrived on time but waited five minutes for the connection from Tours! The trip back was enlivenet by a mother and small child who sat opposite.  He was pretty lively but she did a very good job of keeping him under control.  As it was I had several soft toys thrown at me.

We arrived back at Montparnasse just a couple of minutes down, thankful that we had chosen to go today because tomorrow the trains will be disrupted by union action.  The SNCF calls it a strike while the unions call it "un jour de travail".

In tours Mary entered a patisserie and bought a couple of pastries on impulse.  These came neatly packaged in paper but she had to carry them level because one was a tarte au citron.  She carried it like this through Tours, on the train, where it survived the grasps of the little boy, and in the metro.