Sunday 8 December - Waylaid at the Patisserie and Hurdy Gurdy

I went out early, sort of, this morning to buy croissants to continue our comparison tasting.  There was a short line up at Diva et Chocolats on the rue des Dames and the baker came out, greeted everyone, and placed a few pastries on the counter.  A delightful lady standing behind me said.
"They look good don't they".  I agreed.
"Have you tried any of them?"
I explained I was only here for a short time.
"Then you really should try them."
"Which ones would you suggest?"
"They are all good, but you should get one of these (raspberry macaron) and one of those (chocolate gateau).  You can share them half and half with your wife. Then you can come back another day and try two more."
"My wife will kill me.  We are trying to lose weight."
"You had better get them now as they will be gone by eleven o'clock."
The lady behind the counter was grinning widely as everybody knew everybody else in the shop.
Of course, I bought two magnificent creations, one in chocolate and a raspberry macaron.

The macaron was crisp on the outside with cream on the inside.  The raspberries cut the richness very well.  The chocolate was a chocolate mousse with soft chocolate on the outside and a little fruit cream inside which was excellent but did little to hide the richness.  What impressed us was that I met the man who had made these this morning and transported them less than two blocks back to the apartment. He only makes a few each day so they can be considered as individual creations rather than mass produced cakes which are the only ones available in Canada.

No sooner had we finished breakfast than we heard the strains of a hurdy gurdy man - an organ grinder.  He came along the street and stopped in front of the apartment.  We threw him a couple of coins that his lady assistant picked up and he waved and smiled at us as he played his tunes. 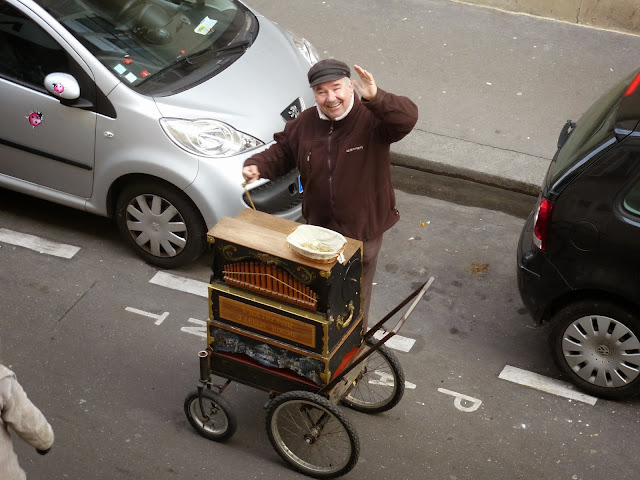 We thought it would be fun to go the the Monge market and walk along the rue Mouffetard market.  It is sufficiently before Christmas to be a normal Sunday rather than the Christmas market etc.  Such proved to be the case.  The Monge produce market was going full bore, the line ups before the green grocer, meat and fish stalls were especially long.
Mouffetard was its usual busy self and at the bottom end there was a man with an accordion and a live microphone.  Ladies would come up, take the mic, and sing a song.  There was dancing also.  We didn't hear any men singing but I presume they would have done as well.  Edith Piaff was very popular, "Mi Lord".

Lunch was poele de St. Jacques (scallops) for Mary and entrecote for me.  The waitress changed to English to ensure that Mary did indeed want the scallops.  She explained that many mistook poele for poulet and thought they were getting chicken.  Half way though our meal the waitress took out two plates of scallops to another table and brought back one to the kitchen with a grimace - they had thought they had ordered chicken.  The scallops were very good indeed, being served in a rich cream sauce that had a lobster bisque as a base.  The chicken fans didn't know what they were missing.

It was a fairly short walk to the Jardins de Luxembourg.  By this time the sun was shining brightly and it was quite warm.  One kid came up to one of the park security guys and explained that his ball was in the pond and he couldn't reach it.  Security marched to his small shack and picked up a net with an extendable handle.  Unfortunately this proved too short so it was explained to the kid that the wind would blow his ball across the other side. This proved to be the case but by the time the ball was within reach the kid and his friend were fighting and we had visions of them tumbling into the cold water.

The Jardins are great for children.  There is one section where the kids can play all day for euros 2.50.  There are climbing frames of many different types and an ingenious zip line.  There doesn't seem to be much concern that the kids will fall and hurt themselves.  It was well filled and the kids were fully occupied.

The petanque games were going full tilt.  This is pretty serious here.

Coming out of the Jardins we stopped to admire St. Sulpice.  The late afternoon light gave a wonderful inpression of this church which has now been fully cleaned (this side at least).

Coming back in the metro was fun.  It was really busy and one always wonders whether it will be possible to get out at the right stop.  However, most people are very polite and make way for those wishing to alight.

Posted by Colin Churcher at 2:02 AM