We took the train to Newport this morning to visit my cousin Hilary.  The three car train was not very full and the ride through Hereford and Abergavenny was comfortable.  This area of marches is very pleasant indeed with small communities set among green fields and rolling hills. It isn't until we reached the outskirts of Newport that we encountered unpleasant industrial blight.  It was interesting to stop at the station in Cwmbran where I lived for a year in 1967.  There was no station then and, even so, it is a long way from where we lived at the bottom of the hillside.
The only unpleasant part of the journey was three civil servants talking in loud voices.  They were traveling from Manchester to Cardiff and were full of their own self importance.  I would have thought it would have been cheaper and more productive to have had a teleconference. I pity real people having to deal with them and their procedures etc. 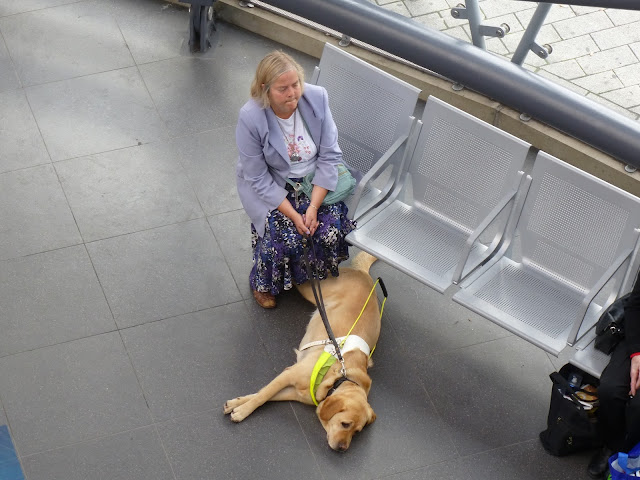 We met Hilary and Yelena right on schedule and went back to her house for a cup of tea and a chat.  Yalena is still a little boisterous and loves to play with squeaky toys when not on duty.  She is a great help to Hilary.  I was amazed to learn that she knows all the shops (and pub) Hilary goes into and when she is at the bus station in Newport she knows which stand to go to when Hilary tells her the destination. Taking Yalena for her walk there were good views of the Newport Transporter Bridge that crosses the River Usk. It is a Grade I listed structure. The transporter bridge is very rare, with only eight remaining in use worldwide.

We had lunch at Junction 28, a restaurant on Station Approach, Bassaleg.  It was good, both from the food and the service.  We were seated in the lounge area where we gave our orders then were taken into the restaurant proper and seated at the table.  The New Zealand Sauvignon Blanc was good and the food was well prepared.  Spare ribs, pheasant, salmon, ice cream, Stilton etc.

We then saw Hilary home and stayed in the taxi to get back to the station,  Newport station has been rebuilt but they have built in a great number of steps but no escalators.  The designers should be made to use it.  The ride back was very pleasant through lovely countryside and with the setting sun providing some warm light.