It was raining again this morning but the forecast was for showers later and gradual clearing. We took the 0901 train to Chemnitz which left a little late because the crew were chatting. We traveled right behind the driver.  Once leaving the Dresden area we had clear signals throughout.
Just after the Frankenstein station we disturbed a fox which was hunting in the grass.  It froze in its tracks and watched us go past. The line is pleasant going through fields and woods with the occasional small hamlet. The conductor came into the cab and started showing the driver pictures he had taken on his cell phone.  It is these distractions that can lead to an accident.  Chemnitz station has a wide overall roof which is shared by the trains and trams.  We bought a two-person day ticket from a machine and caught the #522 tram train as far as the end of the fare zone at Klaffenback Haltepunkt which is a small single platform.


The next #522 took us back to Schule Altchemnitz where we crossed the tracks to take #5 to Hutholz.  This was a tatra tram and was a bit uncomfortable, particularly when the brakes were applied as they grabbed on stopping.  At Hutholz we decided to take the #4 back into town but let the first tatra tram go in favor of a more modern and comfortable one.
A quick lunch was indicated, salad and a wrap, also a piece of cake which we shared. A tall old man with white hair came in and ordered two large pieces of cake with icing and fruit and a capuccino - a very good lunch.
There did not seem a great deal of interest to hold us in Chemnitz, apart from an enormous statue of Stalin's head, so we decided to return to Dresden in the hope that there would be better weather which would allow us to walk around the old town.
We took the next train back to Dresden which turned out to be a two coach double decker that stopped at all stations.  It was 6 minutes quicker than the next fast train.  The view from the top deck was great and the stations were interesting.
Arriving at Dresden we were happy to see the sidewalks dry although there was a cool breeze.  We were able to see the main buildings in the old town.  They are impressive but most are a nasty black and desperately in need of a good clean. We stopped at an outside cafe near the Opera for a glass of reisling. 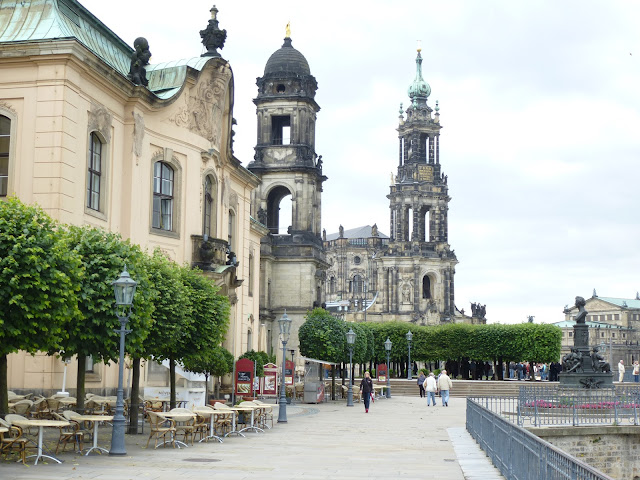 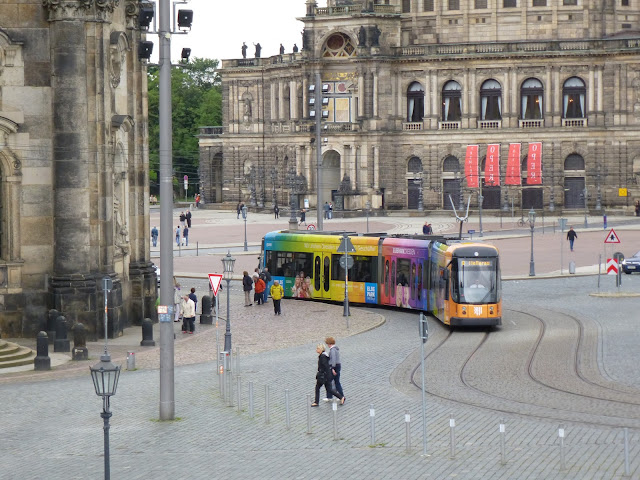 Crossing the river, by tram we saw the Goldener Reiter then walked to Carola Platz to catch a #7 tram to dinner at Dresden's Treppechen at 35 Kesselsdorfer Strasse near the Bunaustrasse stop. It was dark inside with dark wood and orange brickwork.  There was no English meno, no pictures and the waitress didn't speak any English.  It was a typical local place which turned out very well.  The cuisine was home cooked rather than fine dining but was plentiful, well prepared and came quickly.  Mary had breaded salmon and fetuccini while Colin had Steak mit Wutsfleische uberbacken dazu champignons inf Bratkaetagfein.  This was quite a pile of food with a base of very tasty baked potato with a slab of pork on top which was covered in chopped cubes of pork bound together in a cream sauce and with cheese on top.  Add to this mushrooms, carrot salad and cole slaw and it was pretty good. We shared a portion of apple strudel which came with ice cream and whipped cream.  I had a beer while Mary had reisling.
There were several people in the restaurant before we got there including an old man who was feeling up his old lady companion. She seemed to be enjoying it.  The restaurant filled up even more by the time we left.  A #7 tram quickly brought us back to the hotel.
Posted by Colin Churcher at 3:03 AM