0800 coach to Boston Lodge. Another beautiful day. The Aberglaslyn Pass was at its best and the rhododendrons were brilliant.
The tour of Boston Lodge was exhaustive and comprehensive.
The railway can carry out a number of procedures not possible on other railways and a fair amount of work is done to make additional revenue. We saw all the locomotives including Prince, Palmerston and Lyd. Photography inside was difficult because of the light and not being able to get far enough away.
Two double Fairlies and a Garratt were being prepared for the morning trains. 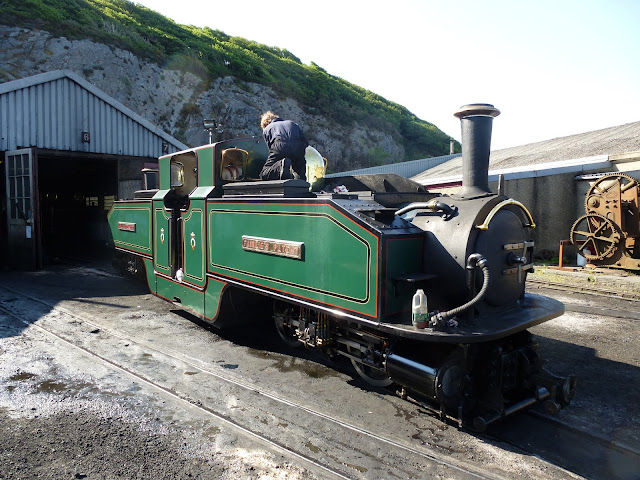 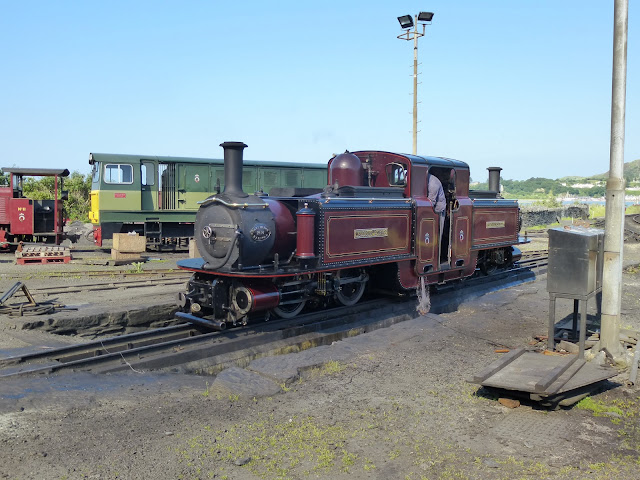 The fireman of a Fairlie explained how it was done. The shovel is small and specially modified. There is little more than 12 inches in which to manoeuvre to get the coal into the two fires. I got up and tried it out and found it was difficult not to get my elbow outside the engine. The fires are set sloping from the back to the front but firing is done from the side so it is difficult to get the coal to the driver's side. The fireman told me there would be times when he would be working hard and would not see his driver for over 20 minutes.
We saw the half compartment which was used by Lloyd George when he was travelling to Blaenau with his secretary - the floor is wider than normal and had a carpet!
Blaenau Ffestiniog was looking good in the sun.
Grass is beginning to grow over the slate tips and the rhododendron "weeds" add a lot of color. It was certainly better than the gloomy, grey place I remember. 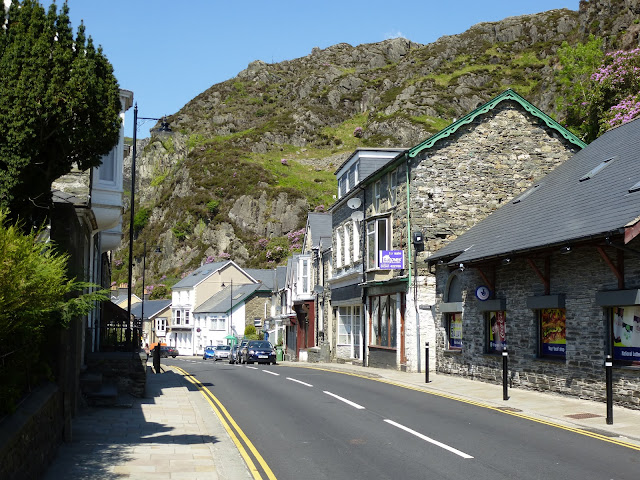 Back at Porthmadog I watched the departure for Blaenau Ffestiniog and the switching to set up the train for Caernarfon.

Following this I was then waylaid by Rob and Dave and we spent the time waiting for the coach in Spooners Bar at Harbour Station.  We were almost driven out by an awful skiffle group singing popular songs out of tune but the lure of the bitter held us there.  They finished up with Oes Gafr Eto or Cyfri't Geifr and Sospan Fach.

Dinner this evening was at a small hotel down the street with John, Dave and Rob.  There was a lot of erudite but largely irrelevant discussion.
Click here to see all pictures taken of the Festinog Railway.
http://www.flickr.com/photos/colinchurcher/sets/72157634492076293/
Click below to see Festiniog Railway pictures in slide show format:

Posted by Colin Churcher at 4:29 AM