I have wanted to travel on a Thalys train for a long time - I love the wine red livery.  However the reality is that these are merely TGV trains in a different livery.  Our train to Koln came in 7 minutes late and contrived to lose another 8 minutes by the time it arrived in Koln - sloppy station work and traffic regulation. The train was badly in need of maintenance as the motion was violent at slow speed through switches indicating worn truck components. Just after crossing into Germany we crossed over from left hand to right running. Koln is one of the German cities unusual in that there are no streetcars and buses to be found in the station forecourt - they are all underground.  The hotel had our room ready for us and we happily divested ourselves of our things and took off.  It is pretty hot here and expected to get hotter.
We managed to find a sim card for my smart phone (3 gigs!) and decided that we would create a tethered hot spot for Mary to use.  I am getting a strong signal in the hotel and so the hot spot is working well for both Mary and me.
Lunch was asparagus and smoked salmon for Mary and Wiener Schnitzel for Colin.   Both very good. The middle aged, red headed, serving wench used her physical assets to the best advantage.  It seems you get a helping of cleavage with each Wiener Schnitzel order.
Another success was to find a copy of the Tram Atlas Deutschland at the book store in the station.  This will be of inestimable help in the next week or so.
The tram part of the day then started in earnest with a trip to Wuppertal Hbf for a ride on the Scwebebahn.  I knew about this from the Boys Book of Railways when I was about 8.  I have wanted to see this for over 60 years.  This is a monorail hanging from a stout steel beam which is slung under A frames and follows mostly the course of the River Wupper (Wupperbruck)  The trains are two cars with each car having two double flanged wheels driven by powerful electric motors.  The trains sway quite a bit, especially on curves where the centrifugal force sends the cars out quite some way.  They sway quite a bit while at the station - there is a movement of almost a foot in total.  The stations look strange because they all end in a big vertical drop off either into the river or a street of buildings.  The trains are quite fast and frequent with stations placed at short intervals. 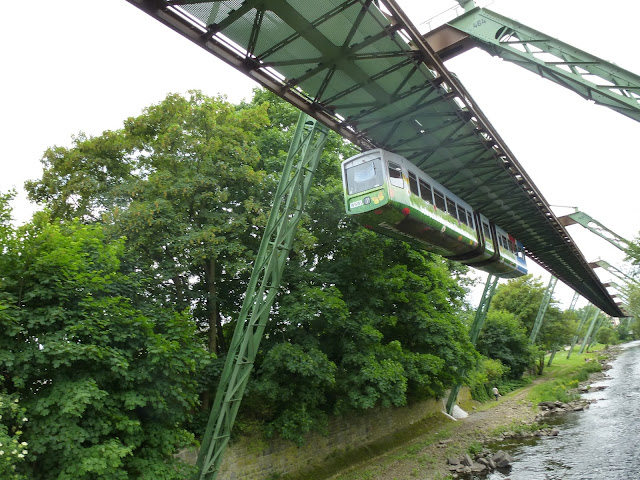 We bought a day ticket using sign language from a helpful lady in the smoke shop in the station and rode to the end in both directions.  The trains are full to crowded, even in the middle of the afternoon. We went first to Oberbarmen Bahnhof at the east end.  Here the trains take a sharp loop to come back on the opposite platform.  At the other end of the line Vohlwinkle the regular trains take a similar loop but there is a system for switching the guide rails into the car barns.  The route is mostly along the river with green banks although the Bayer plant takes up a lot of space towards the west end.  Also at the west end the route diverges from the river and goes along a city street before crossing a motorway. Fascinating and well worth the visit. There are signals at the exit from each station. These are held to red until the train is ready to leave. Therebae also intermediate signals in the longer sections.
Click here to see all pictures taken at Wuppertal
http://www.flickr.com/photos/colinchurcher/sets/72157634476715385/
Click below to see pictures in slide show format.

We came back to Koln then took tram 18 which is pretty much a metro in this section as far as the Zoo station.  We took the cable car across the Rhine which is not too interesting except where we went over a spa where several men and women were prancing around naked.  We quickly took the cable car back but the performers had disappeared.


Back at the Zoo station we continued on the 3 and 18 route to the end on the line at Thielenbruch. For a moment it seemed that the station was inside the car barns. There is a Tram Museum here which seems to be open once a month. This is pleasant commuter suburbs and we had a good view of back gardens.  Unfortunately there was nothing of interest at the, apart from the car barns and the closed museum.  I had hoped for a bar where I could get a drink.
We were, by now, getting tired and came right back to Koln and the hotel.