There are many ways to get to Heidelburg from Mannheim but the #5 tram via Weinheim is by far the longest as it goes through two sides of a triangle. Then trams run in a ring in both directions. We took the first tram to Kafertal and changed to the through tram there. While waiting for the tram there was time to look at the car barns.
Most trams are single ended with doors on one side only. Those going to Heidelberg have to have doors on both sides and are double ended.
The route from Kafertal is under railway rules and this includes some single track through towns with little room and also some running on streets. There are even sections with grass growing between the rails.
There is a ridge of hills in the distance and a lot of farming, both grain, market gardening and small patches of vineyards and berry bushes.
We went right into Heidelberg to the hauptbahnhof and found a map at the Tourist Office. A quick tram ride back to the old town and we walked through to the main square and found the funicular. 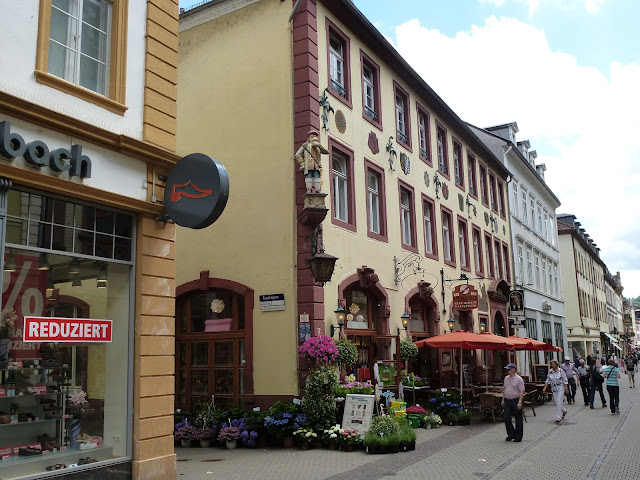 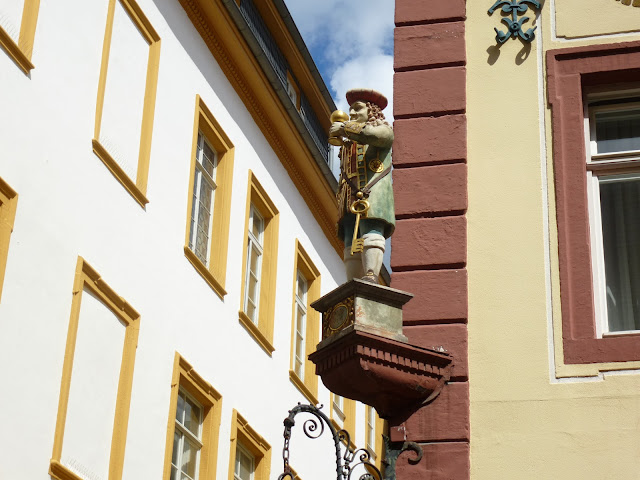 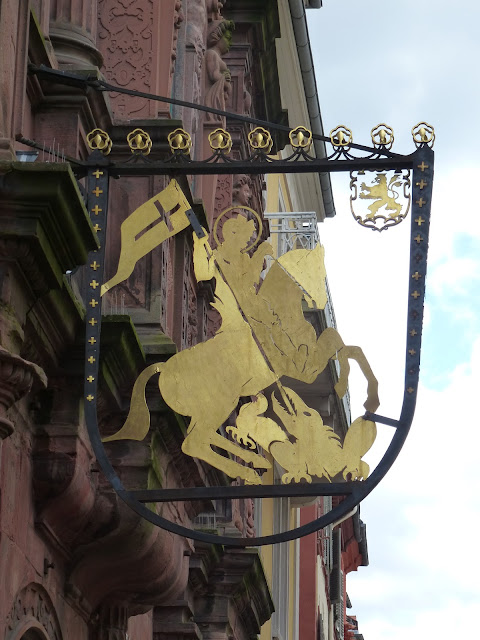 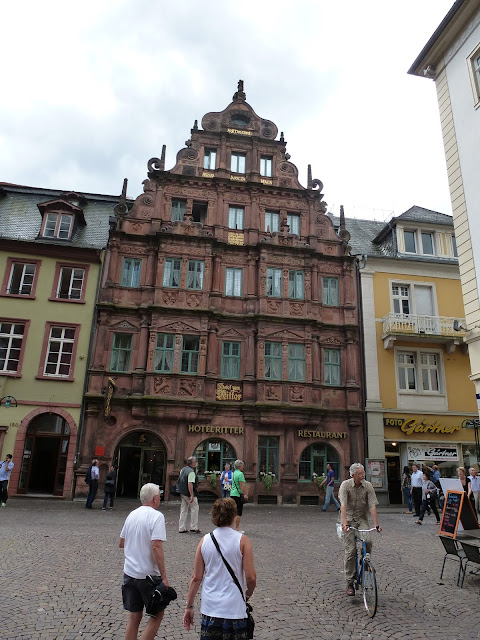 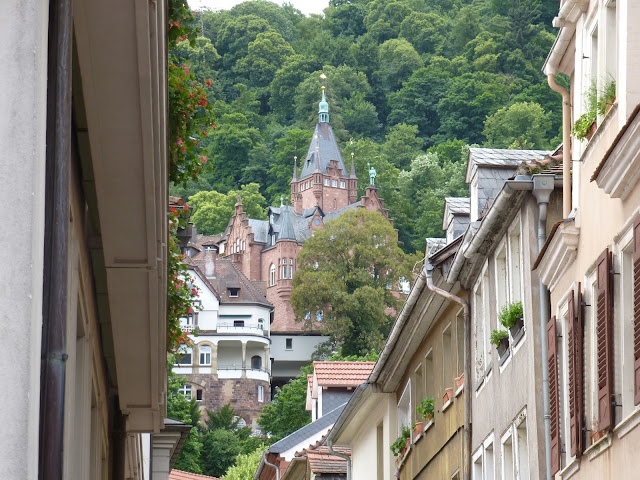 The funicular is in two parts. The lower section is with recent equipment and runs smoothly in tunnel most of the way. The upper section is much longer and uses very old wooden cabins that creak a great deal. This part is through thick mixed deciduous forest with very tall trees and embankments covered in foxgloves. The views from the top are good but somewhat restricted by the vegetation. 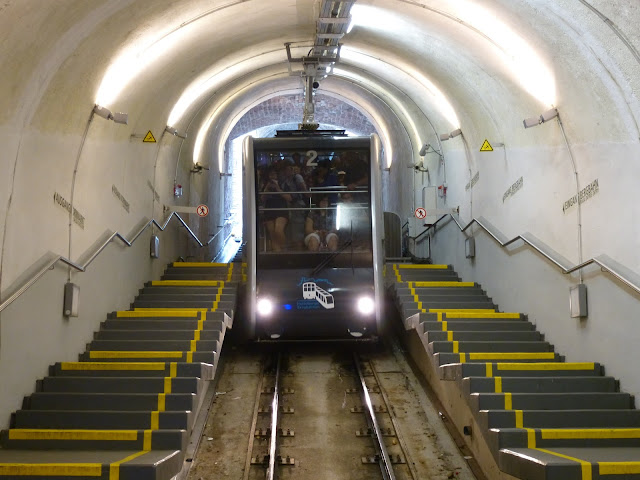 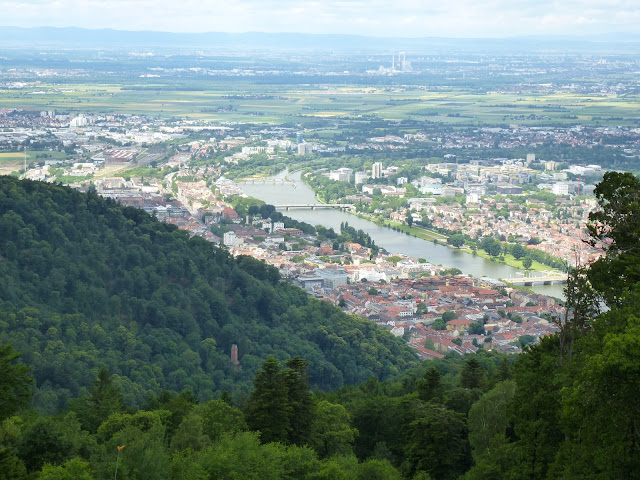 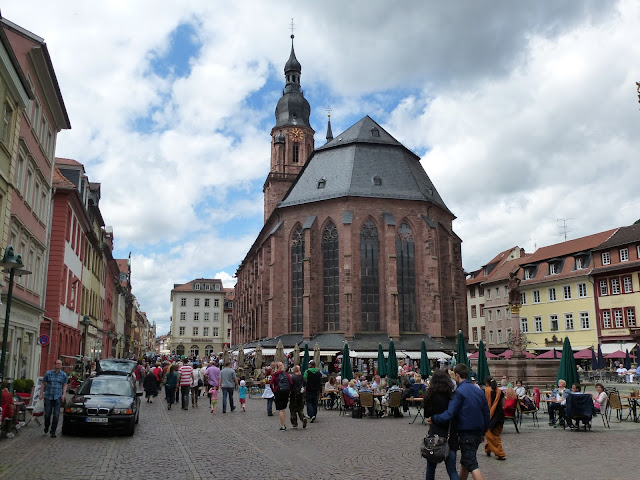 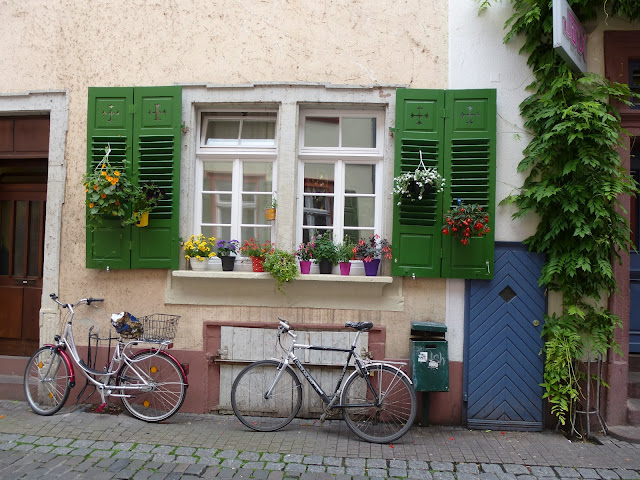 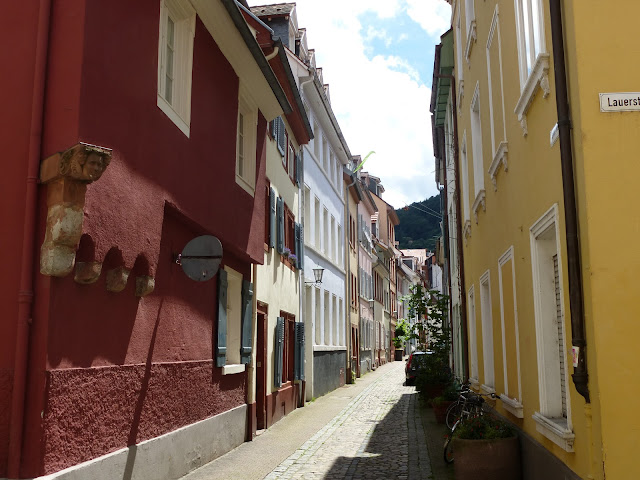 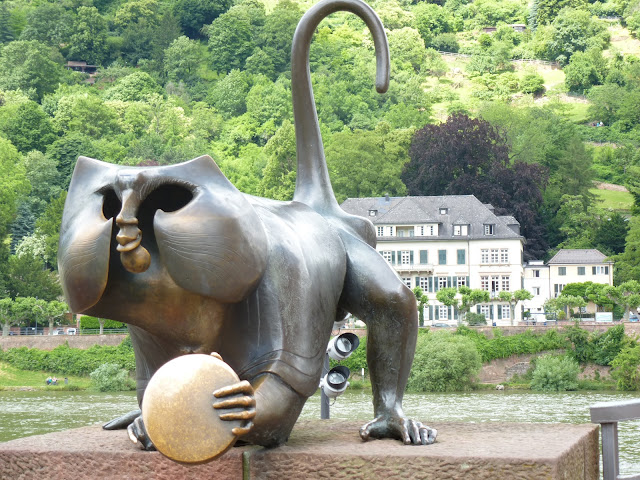 Crossing the river by the old bridge we climbed up to the Philosophers' Path. This was a very steep climb indeed
It seems the philosophers would climb up here to contemplate their problems. I would think the first question to cross their minds would be "Why do I have to climb all this way to think?" The hillside was covered in cherry trees and other vegetation. The views across the river and over the town were exceptional and worth the climb.


The footpath falls more gently down to the town and we walked back and caught the #5 tram the direct route back to Mannheim.
This evening we decided to explore the other (west) end of tram line #4 which runs into Ludwigshavn to Oggersheim, where the street rules end and on railway rules to Bad Durkheim.  The east end was not much to write home about so we didn't have high hopes for this section.  We were proven wrong. Even before Oggersheim there was a lot of open country and one small platform was partly encased with scottish thistle.  The first part after Oggersheim was thickly wooded then the country flattened out and there was intensive market gardening with all sorts of vegetables imaginable, cabbages, asparagus, lettuce, rhubarb etc.  There were also some fruit trees, especially cherries which seem to do well here.  The biggest surprise of all was when the fields changed to vast vineyards stretching as far as the eye could see. The tram was well full as it only runs every 30 minutes in this section.  Bad Durkheim was also an interesting place.  The tram makes a circle around the village square and the DB branch terminus station is close by, there was a diesel train waiting to leave.

Posted by Colin Churcher at 4:08 AM