It was a pleasant sunny day today and the plan was to arrive at Versailles late, take a late lunch and get into the Chateau just before closing.  This way we would avoid the worst of the crowds.  This worked out pretty well.  We took the train from Saint Lazare to the Versailles Rive Droite station.  After La Defense there were good views across Paris, particularly the Eiffel Tower and Sacre Coeur.  We walked the 20 minutes or so to the Chateau.  There is an interesting market building in four pieces, spread over a crossroads. A whole cooked lobstet was selling for €74.  Versailles was very, very busy and the bus car park was crowded.  We made our way down to the garden and the canal, making use of the granite toilets on the way.  It was crowded at the bottom end of the canal but most tourists don't walk very far and we were soon very much on our own except for a very happy white spotted retriever who was just galloping around in the forest. 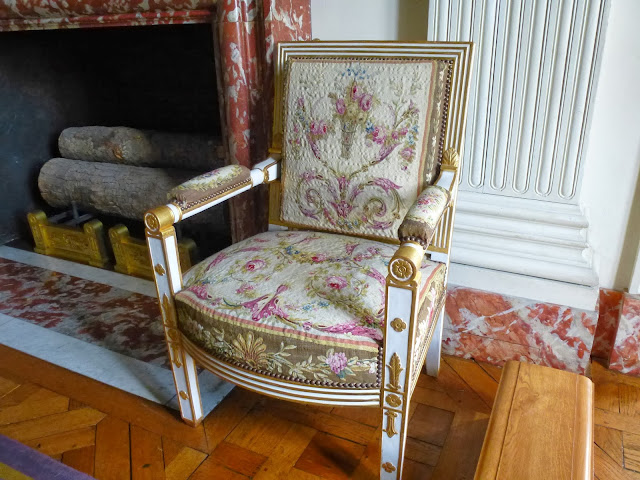 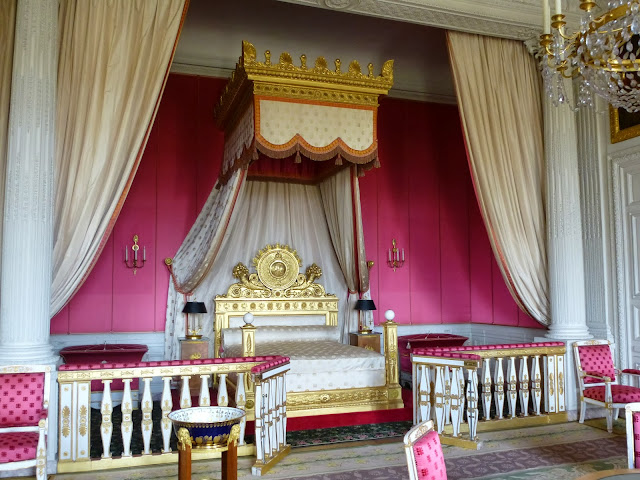 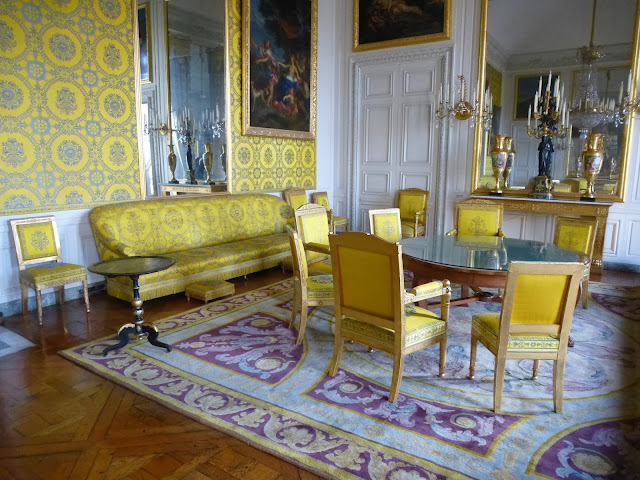 The two Trianons gave us plenty of opportunity to look at the rooms in some detail and then we made the discovery of the day - the gardens by the Petit Trianon. These are laid out in the English style with few straight lines.  There is a stream running through with over bridges and ducks which flowed into a lake which is surrounded by rustic buildings.  There were several paddocks with farmyard animals, rabbits etc and some larger fields with cattle and the larger birds, geese, peacocks etc.  There was even a small vineyard with chickens scratching around.  Later on we came to a field of sheep. 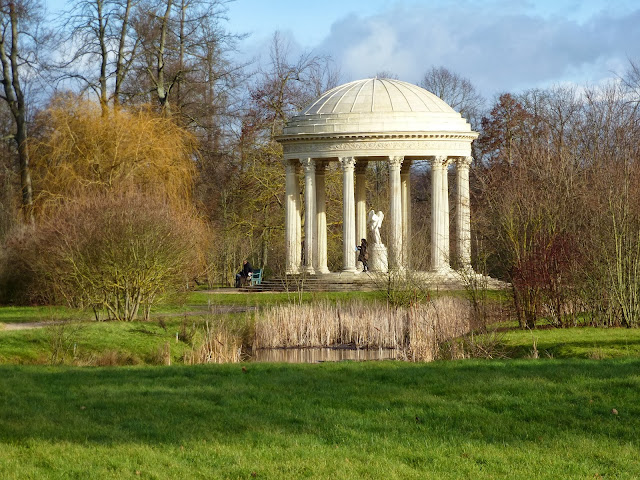 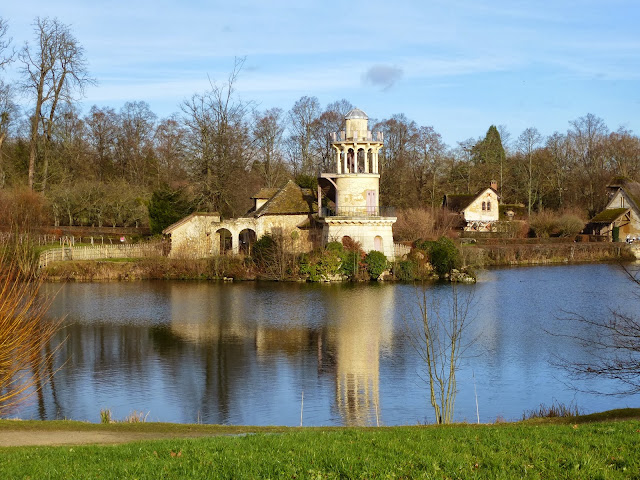 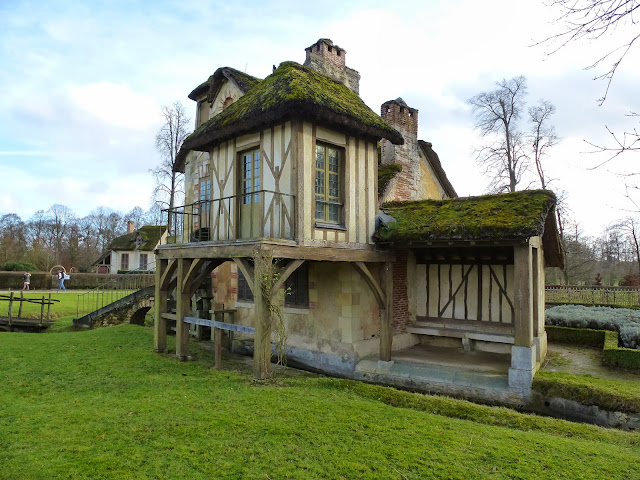 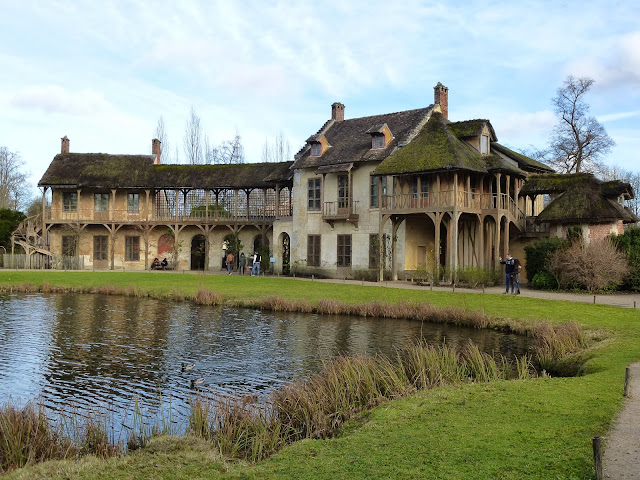 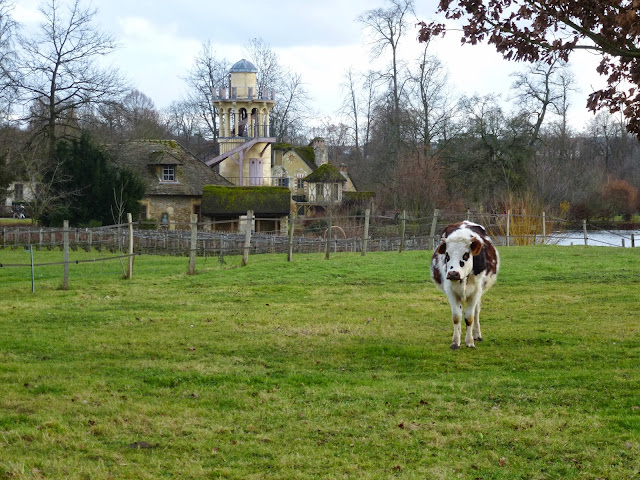 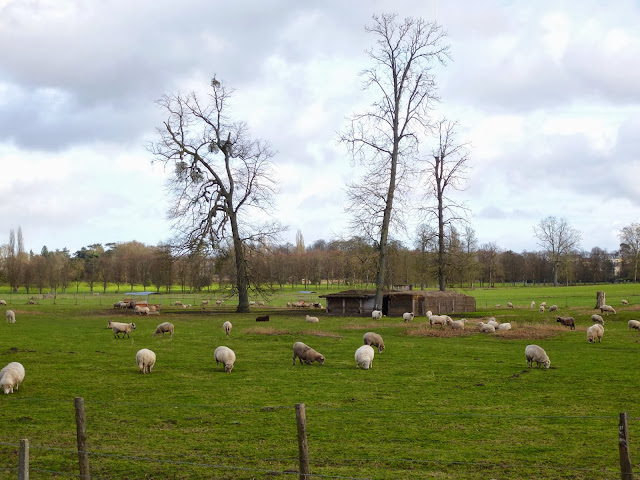 By this time we were pretty well lost but some dead reckoning brought us back to the bistro at le Canal.  This was pretty noisy but provided what we wanted. 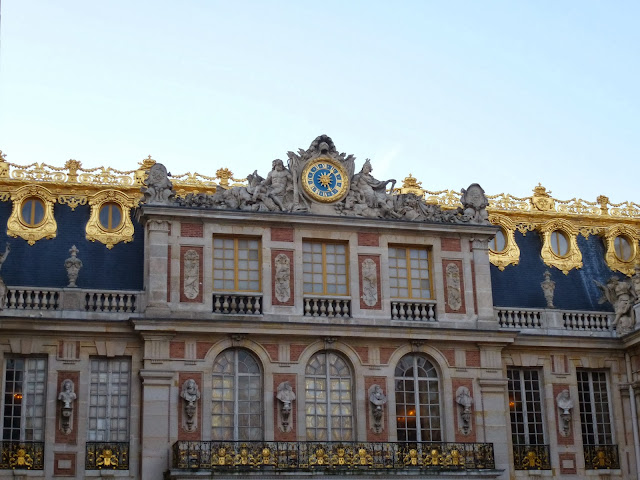 We arrived back at the Chateau ticket office around 20 minutes before closing time but with no line ups.  We were able to walk right in and see everything although there was no lingering.  The Hall of Mirrors was crowded but not jam packed solid as we have seen it in the past.  The visitor actually passes through most of the Hall of Mirrors twice and the second time it was easy to look around.  Towards the end the attendants were trying to get us out but we were able to see everything relatively easily.

There followed an uneventful return to Saint Lazare only to find that line 3 metro was closed because of an incident so we walked home.
Posted by Colin Churcher at 10:19 PM