When we visited Provins last December it was raining heavily and we came back early.  Today we left Paris in a clear blue sky but there were patches of heavy fog.  Was Provins going to be in the fog or in the sun?  Unfortunately the town was heavily fogged in.  The three car train was full with mostly tourists. Leaving the station there was a line of yapping people, including a particularly loud group of Spanish women.  We deviated from the walking route into the town which was also busy on a Saturday morning but at least these were locals. We noticed that there is a very provincial feel here. People will think nothing of blocking the sidewalks to chat while others struggle to get past.  There was a Christmas market in the medieval town square which was quite attractive and a little different.  Most of the local people were dressed in period costume or wore a suit of armor.  It was a festive occasion and people were having fun being photographed with the locals. There were a couple of log fires with a few hay bales on which people could sit while eating roasted chestnuts and drinking mulled wine. One could buy a suit of armour and leather bra and panties and watch an arrow being made.

The restaurants in the old town were either creperies or fairly expensive as they catered to the hoards of foreign tourists (Japanese and Spanish mainly) so we decided to seek out the restaurant where we ate last year (The Estaminet).  It took a lot of searching only to find that it was closed.  In the end we found a second rate place which had only a fixed menu.  The first course was an excellent crustiant of brie - a thin pastry pocket filled with hot, runny, ripe brie.  This was placed over a fairly substantial salad which soon became engulfed in a lovely gooey mess of cheese. The meat was quite good but a little over cooked for our taste. 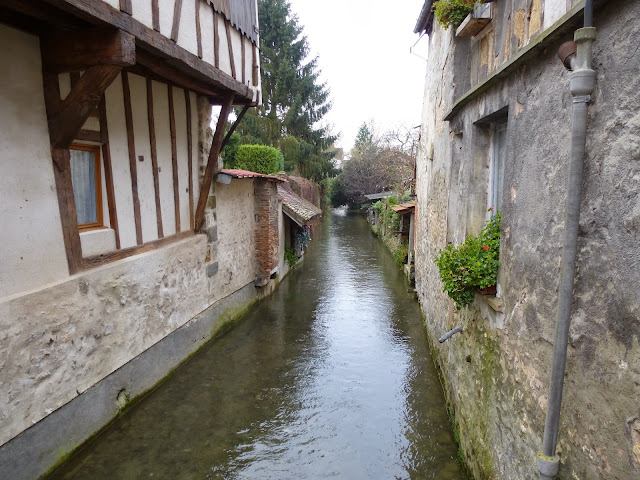 The main reason for going to Provins today was to see the Santa Clause special steam train which was running from Longueville.  I waited for the scheduled arrival but no steam train.  It turns out that while the trains were originally scheduled for today and tomorrow this was later changed to Sunday only.  So we took the train back to Paris, starting in the mist although Paris was in bright sunlight. The #30 bus back from the Gare de l'Est to Villiers was heavily overcrowded.  It was quite an adventure getting down the aisle to the exit.
Click here to see all pictures taken at Provins:
http://www.flickr.com/photos/colinchurcher/sets/72157638723870263/
Posted by Colin Churcher at 9:24 AM