Plenty of time to catch the 0903 Cross Country train to York. There are so many trains departing from New Street that it is difficult to follow on the departure screens. It is easier to get the information from the web.

There is still some brewing in Burton on Trent although nowhere so many breweries as in earlier times.
The clouds became a little thinner as we went north. The twisted spire of the church at Chesterfield was easily picked out - it was build with wet lumber which caused it to take its bizarre form. Slow running through dreary Sheffield and then on through dreary country.

I was reminded of a trip I made along this route from Bristol to Sheffield while I was still training. We had a class four diesel. The guard came up at Bristol and told us we were over tonnage and would have to stop at Bromsgrove to take on a banker. The driver mumbled something rude. As we approached Bromsgrove I said "I thought we were taking on a banker",
"Sod that", was the reply.
So we sailed up Lickey Bank at full throttle without assistance.
There was a crew change at Birmingham and the replacement driver didn't know the diesels. They put another one ahead of us so he didn't worry. As we started off he opened up the throttle too fast and it wasn't loading. I said to him
"Its not loading" to which he replied.
"Bugger it you do it".
That is how I came to drive a train from Birmingham to Sheffield!
Lunch at the Corner Pin with Jennings Cumberland Ale, a pleasant ale with a hint of bitter. At last a cask ale.

I went to the railway museum this afternoon.  Imagine my surprise when the first locomotive I saw was LMS 2500, a 2-6-4 tank that I fired while working out of Shoeburyness shed. It was a bit cleaner than in my day. I actually worked on this locomotive twice, once up to London and back and once up to Upminster as standby in the event of  failure of one of the down commuter trains.  Right next to 2500 was another old favorite SECR 727, a D class 4-4-0 which went through St Mary Cray and Orpington many times during my train spotting days.

The two A4s from North America were still here, flanking Mallard but GWR City of Truro was on the turntable and King George V was close by. I vividly remember polishing its bell when it came on shed one time at Reading.  There was even a Western diesel hydraulic there - I travelled many miles on these.  I took a picture of the first Q1 for Graeme.  Ugly blighters but they could pull like hell.  All in all a very satisfying visit and full of nostalgia. 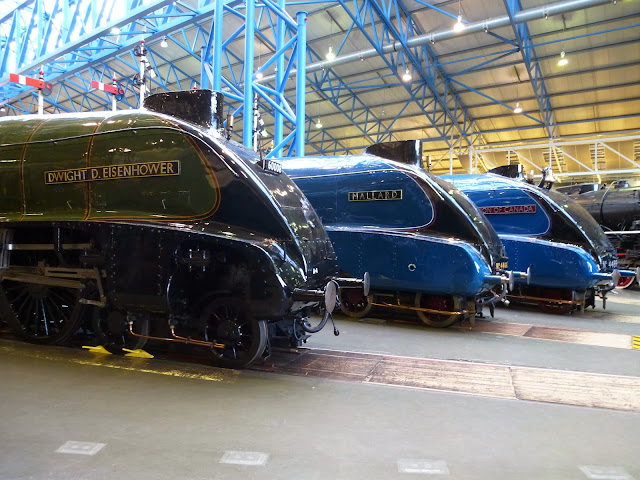 Click here to see all pictures taken at York Railway Museum
http://www.flickr.com/photos/colinchurcher/sets/72157638050609845/
This evening we walked around the town including the shambles and past the Minster.  We stopped at the Golden Fleece which was a neighbourhood pub -  just drinking.  The place was full but the conversation was quiet and subdued.  It had a nice feel about it. I had a Timothy Taylors which I remember from the Three Fishes in Shrewsbury, an excellent ale with a hint of bitter and a pint of Copper Dragon, Golden Pippin which was a very good pale ale.  Very promising.
Posted by Colin Churcher at 2:37 AM