Thursday 6 June - Caernarfon and Llanberis - a Comedy of Errors

Everything that can go wrong will go wrong.
We got on the bus just outside the hotel but the driver took almost 5 minutes explaining why we should get a day pass rather than regular tickets. As a result we missed the connection to Llanberis at Caernarfon which gave us time to get a coffee and use the communal toilet. It costs 20p to get in but there are lots of stalls inside so people line up until there are five or six waiting then all go in at once for 20p.
The bus was a lot of fun. It filled up as we approached Caernarfon, mostly elderly people and mostly speaking Welsh.
The bus to Llanberis duly arrived and lost a lot of time because of road works, the garbage pick up and a sheep with two lambs wandering down the street. The next train to Snowdon Summit was 1630 (it was 1100) so we went across the road just into time to see the train leave for Llamberis Lake.
Decided to abort Llanberis and caught the next bus back to Caernarfon being held up at four locations by single lane working controlled by traffic lights - on two of them there was no sign of any work taking place.
Service here makes Ottawa look good. I find the English spoken here almost as incomprehensible as the Welsh. A large fat lady is sitting on a bench slawming copious amounts of a green slime on her vast flabby legs. They both looked disgusting.
We managed to score two tickets back to Beddgelert on the 1430 train. There was great confusion in the booking office when I produced a members card then asked to pay. "But members travel free." "But I want to pay unless you would prefer to take this as a donation." The train came in behind Garratt #87 with South African Railways plates with lots of burnished copper and clean paintwork. It cut off then stopped obligingly to allow the punters to get their pictures.
The driver was enthusiastic about the Garratts, especially the fact that the coal hole is above the fire hole so the fireman doesn't have to lift the coal. The engine works hard in each direction to the summit and then the fire has to be worked down carefully to avoid clinkering. They have been using Russian coal but have recently switched to Merthyr Tydfyl coal which is hard coal.
We made it to Rhyd Ddu, the last stop before Beddgelert.  We were due to pass another train here but there was a delay and we were eventually told that there was a fire on the line and the other train was still at Beddgelert.  When it arrived here we would go on.  I took out my bus timetable and found that there was a bus at 1609 from the stop on the road next to the station.  We still had our runabout bus tickets so we decided upon a drop dead time and then went out to the bus stop.
This gave an excellent opportunity to see the Garratt but then the train from Beddgelert arrived.  Our train whistled off and left at the time the bus was due leaving us standing at the bus stop hoping we had made the right decision. 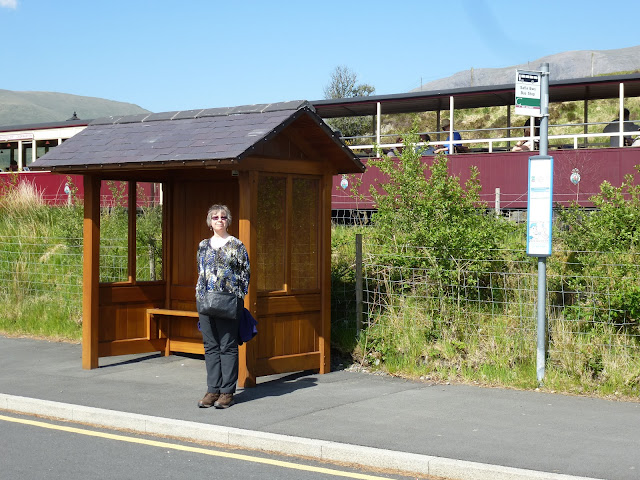 The bus eventually came about ten minutes late and brought us quickly back to Beddgelert where we arrived about 45 minutes ahead of the train. The welcome dinner was fun. Dan May seems a very competent leader and we joked a lot with Rob of Alton, David of Woking and John of Leicester.

Posted by Colin Churcher at 2:28 AM