To repair a problem with excess tearing in my eyes Dr. Pirbhai, my ophthalmologist, carried out bilateral ectropion repair and punctoplasty.  Getting to the surgery at 1655 Kilborn was an adventure.  The 148 bus from Hurdman normally runs every 30 minutes but at this time of day there are buses running every 5 minutes or so for the kids going to Canterbury High School.  The kids were surprisingly well behaved and as a result of the increased frequency I was there in very good time.

The nurse had to fill in a form with me which included questions about potential allergic reaction to various anaesthetics all of which had very long names and none of which were familiar.  The last time I had an anaesthetic was in 1987 and before that in 1948 so I wasn't able to help much.

The nurse comes from Mountain and she was surprised that I had heard of the place.  I was able to assure her that the CPR did have a station there.

The anaesthetist said I would be under a mild anaesthetic and that although I would be awake I probably wouldn't remember much about the operation.  I said "I don't like the idea of someone coming at my eye with a knife", to which he replied, "That's what most people say."  In the event, I remember everything pretty well, including chatting with the surgeon while he was cutting away.
"I can smell burning."
"That's your skin!"
I don't remember the knife bit so maybe he came at me from the side or I have conveniently forgotten that part.

Mary guided me home in a taxi.  The first day before the bandages came off it didn't look too bad. 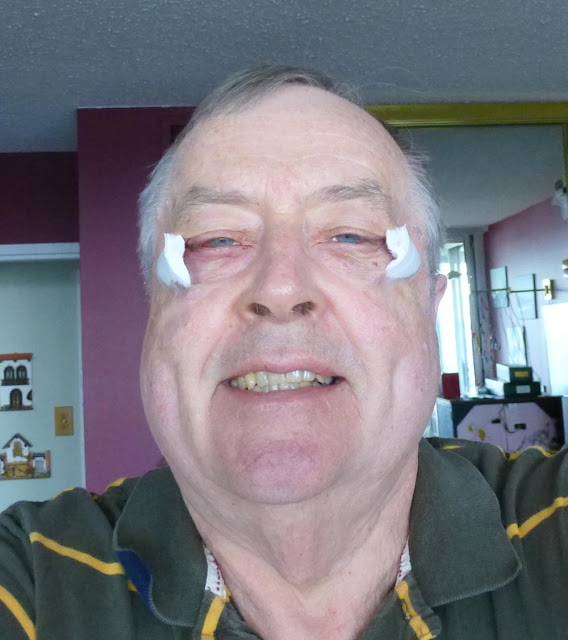 To bring the swelling down I have been resting with a cold compress over both eyes listening to music.  Mozart works very well.  If anybody asks I am putting out the story that I got this while foiling a bank robbery down the street.

I had planned to go out for a short walk on Friday but Mary said "Are you sure you want to go out looking like that?" so I decided to stay in.

She said the same on Saturday morning even though I offered to wear make up.  I thought "Bugrit" and went out anyway.   I don't think anybody noticed and if someone had commented I would have retorted "You should see the other guy."
Posted by Colin Churcher at 9:09 AM